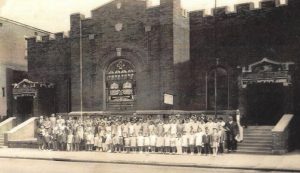 1925  The New Hope Baptist Church came into existence with thirteen dedicated Christian families that migrated from the south seeking a better way of life, Settled in Cincinnati West End, calling themselves “New Hope”, the early Congregation met in various locations, they had eight Pastors from 1925-1935. Some of the first Deacons were started during the time period, from The Founding Families that started New Hope.

1935  Rev. John M. Stephens was called as the pastor of the New Hope Baptist Church

1949  Major building expansion and reduction plans were started, completed in 1952 With the original building being doubled in size and re-dedicated in 1953.

1962  The Church property on 7th street was purchased to make way for the I-75, and the Property at 3655 Harvey Ave was purchased.

1963  The last service was held at the West seventh street site. 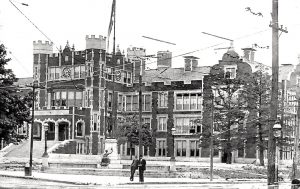 1977  Rev. John M. Stephens retired as Pastor of New Hope, after 2 years of service, he Continued to serve as Pastor Emeritus until his death in 1982.

1979  The church name was officially changed to Greater New Hope Missionary Baptist Church. The Civic Ministry was established for the outreach and community activities.

1982  Ground breaking for renovation and expansion and completed in 1987. 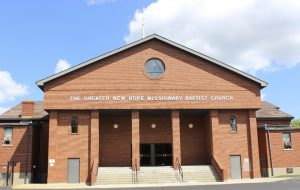 1994  Rev. Donald E. Jones Sr. was installed as pastor of the Greater New Hope Missionary Baptist Church. The Prison Missionary was also established serving as the Talbert house and jails in the evangelizing God’s word to about 500 inmates. Other ministries such as the Men’s, Women’s, Puppet, Mime, Praise Dancers and the children church were all established to meet the spiritual and social of the church and community.

1999  In the history of Greater New Hope (New Hope), there have been only three Secretaries; Lula M. Jenkins, Mary Titus; and in 1999 Cassandra Jo Rice Whittaker started serving in this role as the secretary. The Sunday early morning worship service began to meet the worship needs of those that work Sunday afternoon or evening.

2001 The Christian Education Ministry was encouraged to further encourage, equip and empower the Congregation as they answer the call of God to serve and witness for him.

2002  The Lewis Danforth Endowment fund was established the Lena Wise Nursery and the John and England meeting room was dedicated.

2005  The Family Life ministry was established to aid and support individuals and Families in need, and Enhance quality of life for the persons coping with cancer.

2006  Kitchen remodeled, audio system upgraded along with the security systems.

2007  The Early morning choir established under the leadership of Sis Alberta Shaw aka (Mama Shaw). The automatic handicap accessible door was dedicated.

2010  The Book award was established for qualifying college students.

2016  110 members attended a 12 week Experiencing God Journey that increased their Knowledge of God and His presence in their life journey; the Young Adult Ministry began with a Sunday School class.

The Stephens Fellowship Hall was totally renovated due to the August 28, 2016 major flooding in the area of Avondale and surrounding communities from the city sewer drain systems.

The Capital Campaign “Faith Walk Pledge” started, for the purpose of projects to help the upkeep and upgrade to the building and property God has entrusted us with. Began the upgrade of Audio visual equipment, which is ongoing.